i have restart the server by below command but still same issue , any idea ?

First check that your hollaex dashboard is fully set up. Then restart again the server and if it didnt work what you could do is to factory reset the docker and terminating the exchange if you dont have any user accounts in there. Then install the kit again and run the commands again. If that didnt work you could check your network for any irregularities. For example check if your 80 and 443 ports are open.

Thanks for update, is fixed now
but I still getting this error while run the next step 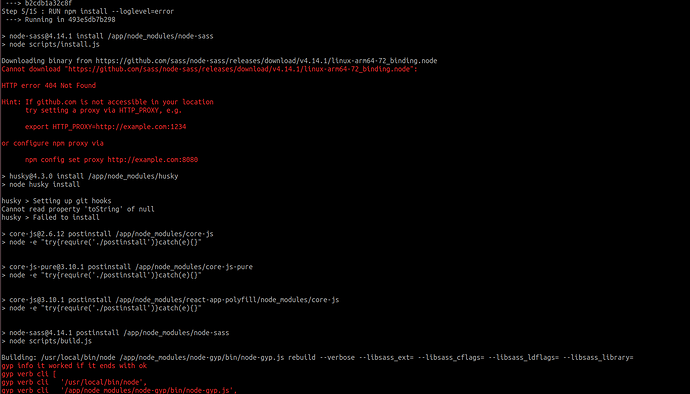 Hi. Looks like you are trying to build the hollaex web on an ARM machine?

Which machine are you on right now?

HollaEx Kit itself does support multi-arch build and run, including the ARM environment.

The only problem here is the node-sass, which is one of the dependencies of the HollaEx Kit web. Node-sass currently only provides binary for amd64 CPUs.

I’m not going to say that there is no way to run full HollaEx on the ARM machine, but you gotta do some dirty job for now…

First, you need a normal amd64 computer, like your typical laptop or desktop. And, get the latest HollaEx CLI v2.0.12 both on the amd64 computer and ARM server.

You should also copy your HollaEx Kit directory on your server to your computer too.

Now, run hollaex web --build --arch arm64v8 on your computer. This will make a web image for arm64v8 arch, but with amd64 based npm dependencies. So with this way, you would be able to package an arm64v8 web image with an amd64 version of node-sass and everything. This will have no issue cause hollaex web image got only static files at the end. There will be no compatibility issue.

You should push the built image to Docker Hub or any other Docker image registry.

Then, move to the ARM server, and pull the pushed image on it first.

You should also run hollaex server --restart and hollaex web --restart right away after you applied the image.

Once everything gets restarted, it would start to function.

Please give a shot and let me know if something does not work as expected.